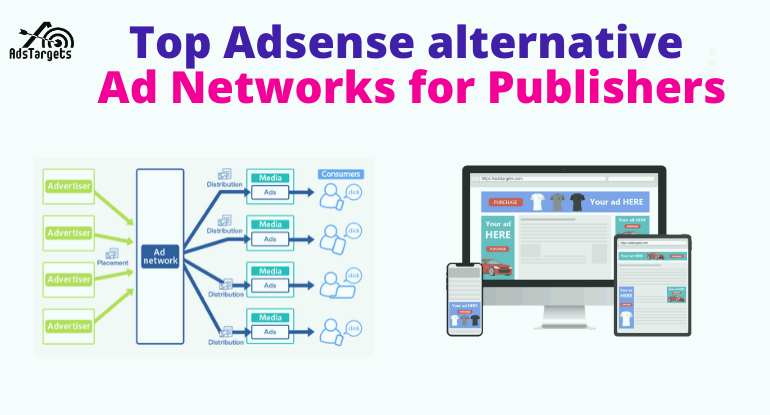 However, a simple search could return millions of results for keywords such as “Best Adsense alternative ad network”. “Alternative Ad networks to Google Adsense”.
This doesn’t only get publishers confused but also lead them to make a horrible decision when deciding on which Adsense alternative ad network to choose.
What makes it even more difficult is because most of those Adsense alternative claim to be high paying AdSense alternatives which in most cases they are not what they represent.
As new Ad Networks come on board every year, most of them struggle to get publisher’s attention which leads to a false representation of their brands.
To make things easy for publishers and also present them from falling into the wrong hands, we craft this post while suggestion the best options they can choose from starting from AdsTargets.

In this post, we spent some time comparing among the top Adsense alternative Ad Networks for publishers. We simplify things for your decision-making process. so… stay with us on this and trust us you will be happy you found this blog post.
Let’s jump into it…

Many of you might think why AdsTargets comes first on our list. You are right to think that way cause AdsTargets is relatively new and not as large as other Adsense alternatives. our reason is simple. AdsTargets Ad Network made our number one list because AdsTarget runs virtually the same Ads types run by Google Adsense.
Apart from Ads, AdsTarget made things easy for publishers to register and start showing ads on their website and blogs.
AdsTargets has a powerful advertising technology that enables advertisers across the globe to advertise on a hassle-free advertising platform while those Ads are served on publishers all over the world making them money like never before seen in the history of monetizing.

AdsTargets accepts publishers all over the world. Adstargets do not have though requirements for accepting publishers like other Ads Networks which makes it easy for publishers to be accepted. this is another winning feature to be compared with Google Adsense.

As a publisher, your content plays a vital role in being accepted by AdsTargets. Your website or blog will not be accepted if your content is about or have some potion of violence, drugs, racism and any form of illegal activities and discrimination.

For more information on that, refer to Publisher terms during application for more details. Website and blog with such content will not be approved by AdsTargets.

Another factor that differentiates Adstargets and Adsense is their threshold, AdsTargets threshold is only $35 which makes it another Adsense alternative ad network for publishers. On the other hand, Google Adsense threshold is $100 which take very long for most publishers to reach that point.

AdsTargets and Adsense both pay higher for clicks and impressions that come from certain geographical areas or countries such as the USA, The UK, Germany etc.
This is basically because of the click value that comes with those clicks. Also, Adstargets pay better commissions if the clicks come from the advertiser’s target location.

AdsTargets allows publishers to monetize with Banner Ads, Text Ads, Interstitials also known as Full-screen Ads, In-App Ads also on both Desktop and mobile devices. As a publisher, you will be able to make money within the first few weeks of monetizing your website or blog with AdsTargets.

Media.net comes number two on our list of Adsense alternative ad networks which makes a lot of sense and here is why…
Media.net is powered by Yahoo and Bing and controls a reasonable amount of the advertising industry. Media.net have one of the most advanced advertising technologies, it is one of the leading contextual advertising and monetizing platform in the market today. 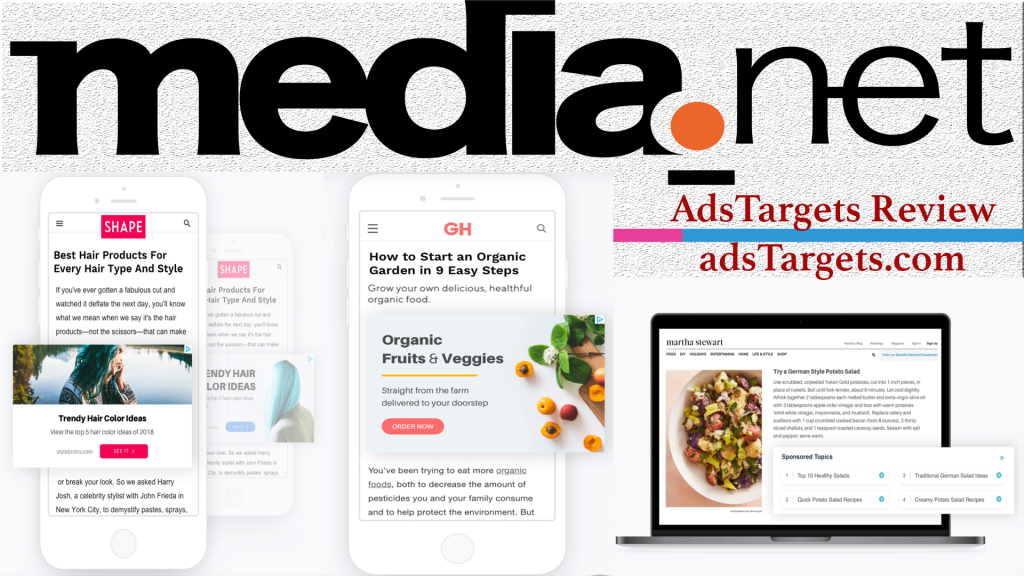 the company has grown to employ over 1300 employees according to their latest figures shown on their about page. Their operations spread through America mostly the USA and Canada, Asia and Europe.

However, their traffic distribution by Ad Spend/Revenues in 2018 mostly comes from the USA with 90%, 5% in the UK and Canada while the rest of the world takes the last 5%. Of these, mobile takes 62% and desktop 32% by devices.
Media.net net is known for contextual ads, Native Ads which they run on desktop and mobile devices, they also run banner Ads and Interstitials also known as full-screen Ads. Their inventory is very similar to Google Adsense and AdMob which make it an Adsense alternative Ad networks for publishers.
Media.net Payment threshold is also $100 similar to Google Adsense. These similarities make media.net a top Adsense alternative ad network for publishers around the world.
In general, Media.net has almost everything you can get from Google Adsense.
Most publishers are okay with their payments terms and they usually pay through Paypal and Wire-transfers while Google Ad sense does not use Paypal at all in paying publishers.

PropellerAds made our list of Adsense alternative ad networks for publishers. Let’s break it down for you…
The Ad network started in 2011 and has grown so fast and so big over the last few years. Even though they might not have a similar business model like Google Adsense, they have served as a great alternative for publishers and in some cases pay higher CPMs for publishers. In figures, PropellerAds have over 5000 publishers, 4600 Ads Campaigns, about 700,000 Ads impressions daily, about 8600 leads monthly.

The Ad Network offers a multi-channel advertising solution such as Display ads, video ads, mobile ads, and in-app across desktop and mobile devices. Their advertising technology also offers great customization possibilities for both advertisers and publishers.

PropellerAds pay their publishers through Paypay UDS, Skrill USD, Wire USD, Wire Euro, Webmoney z, Payoneer prepared MasterCard and Payoneer Bank transfer are all payment options you can use as a publisher at PropellerAds.
Here are the most Ad inventory and niches served by propellerAds

We recommend you check them out here: PropellerAds

RevContent also made our list of top Adsense alternative ad networks. The reason is simple and we are going to explain why… RevContent is one of the Ad Network all bloggers and content creators should be using side by side with their ad networks. 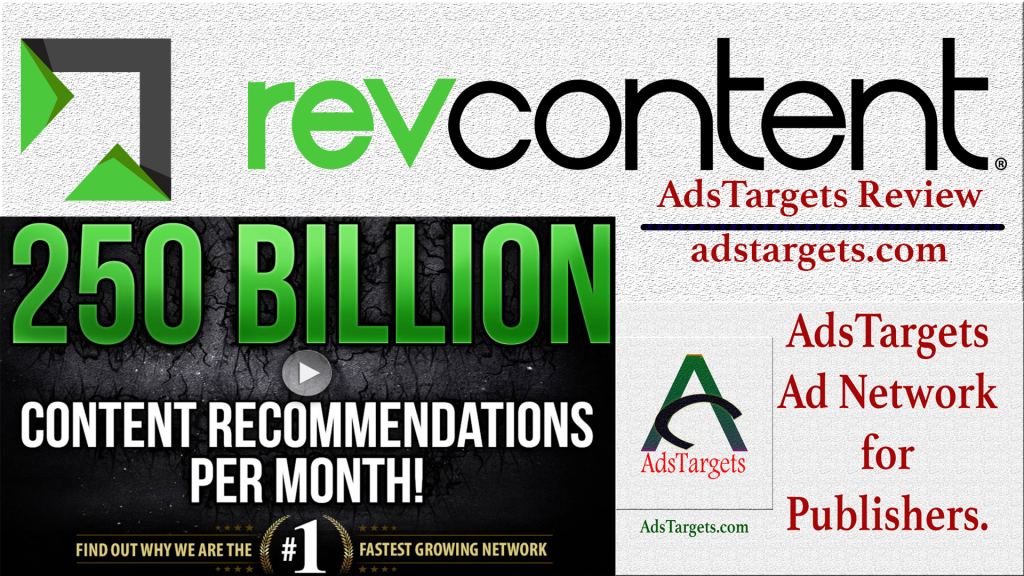 My reason for saying is simply because of their Ad format that comes inform of recommended content that looks like a recommended post from your website.
There is no reasonable reason why a blogger should not give them a try. Make money with RevContent start here

Another interesting thing about RevContent is, their Ad units are designed to blend with your content in a way your visitors will hardly know its Ad content which also makes a lot of sense as it does not interfere with your audience purpose of visiting your website or Blog.

RevContent Ad network is simply the largest content recommendation in the market. Their CPMs are considered very high when compared to other Native Ad Networks.

Here is another cool Adsense alternative ad Network for publishers known as PopAds. This Ad Network is for those publishers that want quick payouts and also love PopUps Ads, Pop under Ads, and other similar ad units. 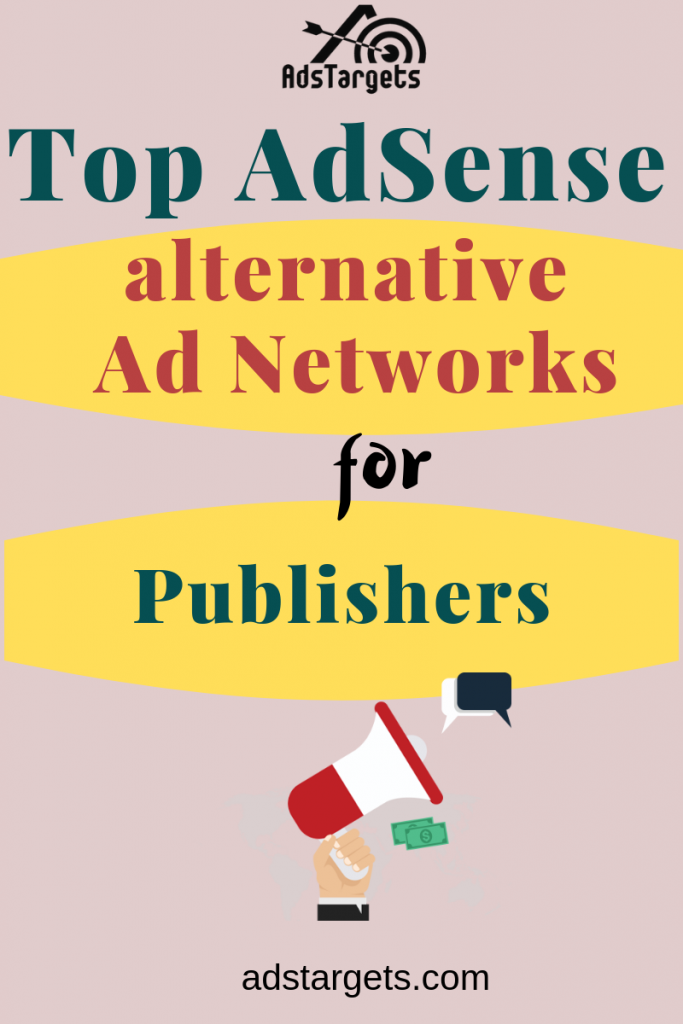 PopAds pay their publishers on daily bases as far as they are able to make up to $5 in their accounts. This is the reason why we said its cool for those publishers that want quick cash and get paid every day.

Another cool feature of PopAds is that their approvals are easy and setting up your Ads for the first time takes only a few clicks and you are up and running.

When it comes to monetising of your content with native ads, you might want to give AdNow a try. This Ad network is completely dedicated to allowing publishers publish native Ads using a widget on their blogs or websites.
It is a cool way of monetising your traffic especially if you are a niche specific blogger or a webmaster that have a lot of traffic to monetise.
Here is AdNow in figures

AdNow is a CPC and CPM native ad network from the U.K but works very well in several countries as shown in the above figures. This makes your chances of been accepted very high as a publisher.
It is also belived that natives ad deliver more CTR rates than the traditional banner and text advertising which may make you wanna give it a try.

As usual, we bring you a great list of Adsense alternative Ad Networks so you won’t have to go around wondering.
This list is based on facts and proven records and is written with the intent of helping you make easy and effective decisions when choosing Adsense alternative ad networks to monetize your content.
Let us know your take on our list in the comment section below.

How to become an Amazon Affiliate

CPA Marketing – All you need to know

What is CPM and How Does It Work