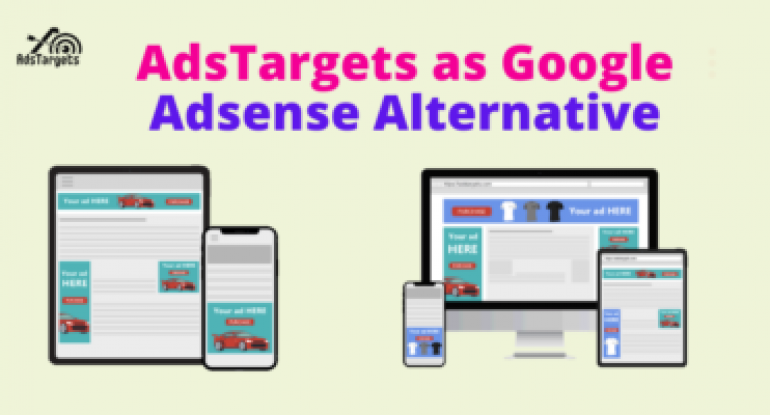 There is so much search going on about Google Adsense alternatives or alternatives. This is mostly coming from publishers who either want to monetize their traffic with similar ad networks like Adsense or some publishers that are already been blocked by Google AdSense.

It is common among new bloggers some of which applied for an AdSense account but were not accepted due to various reasons while in some cases publishers just want to have an alternative ad network to monetize their traffic.

In whichever way, it is not always a good idea to have all your eggs in one basket, and here is why. Google Adsense ban a lot of publishers sometimes for minor offenses without a warning or second chance to fix their problem. To be frank, their policies and terms of use are pretty tough.

On the other hand, it’s good but not also good as many publishers are banned without specifically letting them know their wrongs.

The good news is, you have an option as there are always options or other alternatives in every case. AdsTargets is just the best fit for publishers looking to monetize their traffic with Ad Networks such as Google AdSense.

Even if you are currently using AdSense, you are welcome to publish AdsTargets Ads on the same websites or blogs without any issue.

Here is the comparison between AdsTargets and AdSense

Comparison between AdsTargets and AdSense

There is more to compare between these two ad networks for publishers, however, we can draw on the most important factors that matter to publishers.

The fact is, Adsense is the biggest and the most popular ad network for publishers globally. The good is, it’s owned by Google which has the highest amount of advertisers more than any other ad network out there.

The challenge for most publishers is getting approved by AdSense while thousands of publishers are banned from the network every day. The chances of getting banned are very high due to their strict policies and terms of service.

On the other hand, AdsTargets offers a consolation for publishers around the world allowing publishers to monetize their traffic just the same way they do with Google AdSense.

AdsTargets as a Google Adsense Alternative pays publishers about 85% of the advertising revenue received from advertisers making adsTargets one of the highest-paying Ad Networks for publishers across the world.

AdsTargers as a Google Adsense Alternative goal is to make sure publishers are paid what they deserved while they concentrate on creating quality content that favors everyone on the internet.

We own AdsTargets and mean good for publishers which is the reason we invite you to monetize your traffic with our AdsTargets publisher’s account.

If you have not signed up or registered as a publisher at AdsTargets, You are welcome to register today and start monetizing your traffic with us.