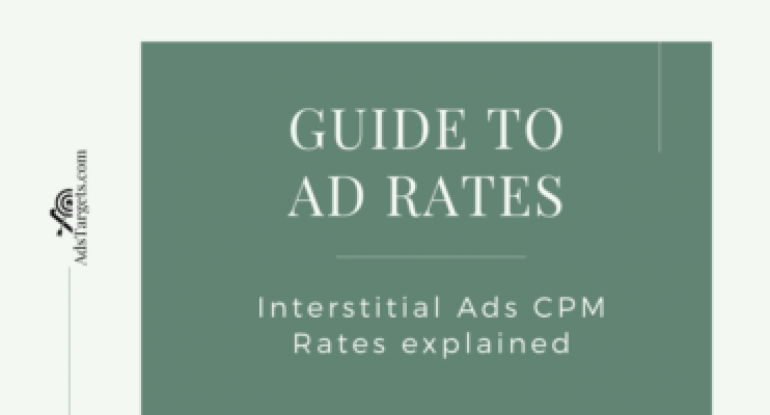 I just answered a question about Interstitial Ads CPM rates on Quora. This is actually an interesting question for me cause I get these types of questions almost every day from publishers willing to monetize their traffic or publishers who have already registered.

Similarly, Advertisers are not excluded as many ask for the rates for Banner Ads rates, Text Ads rates or as many prefer to refer to PPC Ads rates, CPA Ads rates and many other Ad types.

I thought I should clear this issue or rather explain why Interstitial Ads CPM rates and other Ad types are not fixed on the majority of Ad Networks.

The fact is, there are no flat rates for PPC, or CPA that runs throughout the year for either publishers or advertisers on an Ad Network.

This answer is meant to be fair to clarify this question so it can help many others. Interstitial Ads CPM rates vary across Ad networks and are based on various factors. I will briefly mention those factors below

Interstitial Ads CPM works just like any other Ad type and several things are considered as I mentioned above. The geographical location where the advertiser chooses plays an important role in the pricing of Interstitials Ads CPM rates.

This is because some geographical regions have better CTRs, CPA and conversion rates than others and this is always considered in all Ad types. Another important thing to consider is Advertising cost varies in different countries.

Even in the same country, Ads cost differently, for example, In the US, California has one of the highest costs charged for advertising than other states within the country.

This goes for Banner Ads, Text Ads, In-App, Interstitial Ads etc. Again, Advertising costs in the US, The UK, Germany cannot be compared to the advertising cost in India, Nigeria and Ghana.

Advertisers are willing to pay even more in these high-cost regions because of the benefits that come with advertising in these areas.

Just a follow-up on the GEOs, income levels in some countries and regions of various countries are different and so as taxes in those GEOs.

Ad Networks consider this as a price factor. In turn, publishers are paid higher for clicks, CPA and CPI on traffic in certain regions such as the US, UK, Germany.

This same advertising strategy is applied to Banner Ads, Text Ads, Interstitials, In-App ads, and other ads as well.

Mobile interstitials are more popular and mostly more effective in mobile App Advertising. In many cases, the effectiveness of the display device also influenced the cost of advertising.

Ad prices change based on the demand for a particular Ad which forces the bidding system to either increase or decreases the prices of ads including Interstitial Ads CPM rates.

I could actually go on and on but will leave it here and hope this helps in understanding why CPM rates are not fixed and are subject to change always.

The cost of advertising is more complicated than many advertisers or publishers expect it to be. there are many factors that are considered by ad networks or even bloggers or webmasters selling their Ad space.

If there are other factors that you consider to play a role in the advertising cost that is not covered in this post, please let us know so we can update this post to be more relevant.