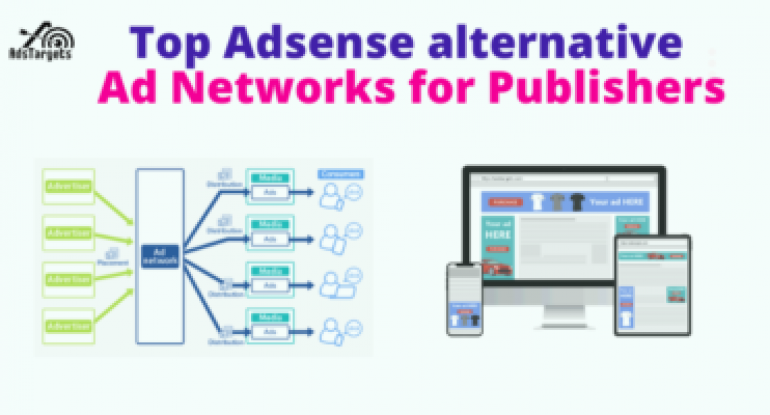 The world of advertising has many ups and downs but most importantly, it has been known to be extremely beneficial for marketers around the world.
For newbies, Advertising is nothing short of an industry that is riddled with complected terms.
These terms make it difficult to understand the differences between Advertising Networks and how to use them effectively.
It is the duty of experts within the industry to make it easy for Advertisers and Publishers to understand the key terms and how to use them effectively.
In this article, we state and describe all the types of advertising Networks.

What are Advertising Networks?

Advertising Networks which are also known as “Ad networks” are online advertising technologies that make it easy for Advertisers to create and distribute Ads to publishers’ Ad spaces.

This simply means, Advertising Network simply connects Advertisers and Publishers for easy advertising and monetization.
One could simply say, the main function of an Ad Network is to aggregate publishers’ inventory to fit advertisers’ demands.

On the other hand, Advertising Networks provide advantages to advertisers as it enables them to create and target their ads to a specific audience while at the same time, advertisers can track their results through impressions and clicks, and video average watch time.
The flexibility the system provides for publishers and advertisers is simply the connection that benefits each party.

What are Mobile Ad Networks?

Mobile Ad Networks work just like any other typical Ad Network, the difference is that these types of Ad Networks put more emphasis on targeting only mobile traffic, these traffic is traffic that is generated only from mobile Apps, Mobile search results, mobile display Ads etc.

Mobile Ad Networks give advertisers to target specific mobile audiences.
For instance, markets advertising Apps could use mobile Ad Networks to target only mobile user who is mostly potential customers.
It makes sense to use mobile ad networks as all types of ads can be displayed or shown on mobile devices such as banner ads, text ads, interstitial ads, In-App Ads etc.

What is PPC Ad Networks?

Pay per click (PPC) which is also known as Cost per click (CPC) is basically an Internet or digital advertising model used by Advertising Networks.
This makes PPC Ad Networks be Ad Networks that specifically use only the PPC pricing model for their adverting.

It is one of the most used advertising price models which is easily understood by advertisers and some can argue it is the most preferred pricing model used by both advertising networks and advertisers.
PPC advertising model comes in two different types: The Flat rate PPC and Bid-based PPC

In some cases, Ad Networks or the publisher will charge based on each Ad space on the webpage.

Bid-based PPC: In this model, several advertisers compete against each other in an auctioning system hosted by the Ad network.
The advertisers set the maximum amount they are willing to pay for each specific ad position on the publisher’s web pages.
Keywords are often used to enhance the target while the auctioning system is triggered automatically each time a visitor triggers the adposition or spot.

What are CPM Ad Networks?

First I will like to explain what is CPM in the simplest way, Cost per impression (CPI), also known as Cost per thousand impressions (CPM) is an advertising pricing model which pays the publisher a fixed amount for every 1000 impressions or page-views generated.

After understanding what CPM is, it will be easier to understand what CPM Ad Networks are which are, Ad Networks that specifically use this type of pricing method for both advertisers and publishers.

Some publishers prefer this pricing model due to its flexibility.
The calculation of CPM is taken from the set advertising cost and the number of impressions which is expressed as Cost per impression ($) = Advertising cost ($) / Number of Impressions (#).
For example:

Effective Cost Per Mille (eCPM) is a measurement system used by advertisers, Advertising Networks, and Publishers to estimate the actual value of advertising costs.
eCPM is calculated in the following manner: Cost-per-Click (CPC) auction is calculated by multiplying the CPC times the click-through rate (CTR) and multiplying that by one thousand. (Represented by: (CPC x CTR) x 1000 = eCPM.).
Example

What is Video Ad Networks?

These Ad Networks focus on online video ads which are mostly displayed before the main video is played also known as “Display video Ads” online video advertising comes in different forms: in-stream, out-stream, interactive, in-game, and webpage-based videos, creating video messaging before, during, and after consumers take in the content on their mobile devices or desktop.

What are Banner Ad Networks?

What is Native Ad Networks?

First let’s look at what is native advertising: I would make this simple for you to understand, Native advertising is simply placing Ads on platforms that match the content of the Ads.
Thus, putting ads on content that matches the ads with the intent to target a specific audience.

A typical example of this may display video ads on videos that are related to the ad video or putting sports equipment ads on sports blogs or advertising new cars on car review YouTube channels or car review websites and blogs.

What is Ad Exchange Networks?

Let’s simply put it as an advertising technology designed to enable the selling and buying of media advertising inventory across multiple Ad Networks.

Ad Exchange platforms use a bidding pricing system. This process is entirely technology-driven.
Some of the most popular Ad exchanges are AppNexus, AOL‘s Marketplace, Microsoft Ad Exchange, OpenX, Rubicon Project Exchange, DoubleClick, and Smaato among many others.

What is Interstitial Advertising Networks?

Interstitial Ads also known as full-screen Ads are ads that cover your screen either on mobile or desktop as soon as you reach a webpage or open an App on your mobile device.

These ads are most common in Apps. they are shown mostly between activities or some minutes after interacting with the App.

Now that you understand what is an Interstitial Ad, let us define Interstitial Ad networks: These are specific Ad Networks that deal with interstitial ads as part of their Ad inventory.

A lot of Ad Networks are beginning to offer advertisers and publishers the opportunity to advertise and monetize with interstitial Ads.

How do I know my Advertising Cost and ROI?

These are some of the most asked questions by newbies in the advertising industry.

We understand there are more than a hundred questions that needed answers but can’t put all of them here in this list. however, we will be happy to know from you which questions you would want us to answer and add to this list.
Let us know your suggestions in the comment section below.