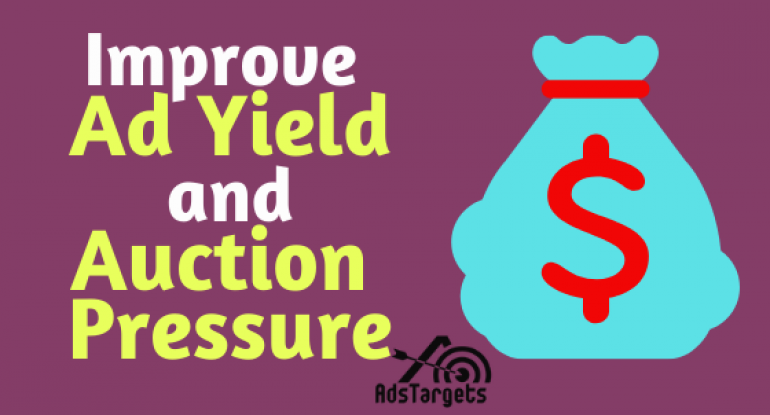 Most publishers aim for higher earnings from Google AdX. However, only a handful of them actually try or implement methods that lead to improved Ad yield in Google AdX and also by increasing their auction pressure.

Auctions generally are designed in a way that the highest bidder is offered the product. In the real world of Ad bidding, the seller (publisher) usually sets the initial price while bidders (buyers) are allowed to bid for the product that is put up for sale.

What comes next is buyers are given the opportunity to propose higher prices and, usually, the price at which the product is sold is higher than the real value of the inventory.

In the case of programmatic advertising, things are a bit different and the auctioning in the case of second-price auctions are organized differently.

But still, the price they bid is rarely the exact amount they pay, since the winning bidder pays only $0.01 more than the second-highest bidder. Now, let me show how it works on numbers below.

Here is an example showing 4 bidders bidding for Ad impressions

Regardless of the form of auction, publishers are constantly trying to increase their revenues, this is one of the reasons why Google Adx is created to help publishers by using either floor price optimization, or auction pressure increase.

What is Auction Pressure?

In cases where the competition is high during an auction, it results in the following:

The question of whether ad pressure benefit publishers or not can be clearly answered that it does favour them in many ways period.

So let’s look at how you can actually increase your Auction Pressure and Improve Ad Yield in Google AdX.

How to Increase Auction Pressure in Google AdX

One of the most effective ways of increasing Ad pressure is to get more buyers to compete for the available inventory within the Google AdX. This requires publishers to do away with some of the restrictions they place within the system which will make more buyers qualified to bid for their inventory.

Here are some of the tips that will increase your performance in Google AdX on your publishing website or blog.

In the quest for publishing only quality and relevant ads, some publishers put a lot of restrictions on some categories which limit some ads showing on their blogs and sites.

This is not always good as it leads to a low number of Ads in the auction. This affects the fill rate and revenues of those publishers.

It causes the CPM for the winning ads to be lower because every blocked category leads to decrease in ads number and respectively of competitiveness.

The advice here is to removed those blocked categories to the status of unblocked to increase the competitiveness among media buyers.

So, here are the steps to unblock those categories.

2. Do away with Advertisers URL Blocks

Hence publishers are given the opportunity to block some Advertisers URLs, publishers do often block just too many of the advertisers URLs because they want only quality ads to appear on sites, the negative effect of this is that it results in less auction competition.

If you have blocked too many advertisers URLs, please consider unblocking some of them to increase competitiveness.

Here are the steps to remove the blocked advertiser URLs:

Majority of media buyers opt for branded inventory because it is known to be premium. As a publisher, this should rather be an opportunity for you to increase your CPMs in the Google AdX.

Consider enabling branded inventory and follow the updated in the reporting section where publishers are updated on how Ads are performing as branded content.

Here are steps to enable branding in Google AdX.

With the recent Google Adsense updates, one Ad type (Responsive) Ad types make it easy for publishers to publish all Ad types using one snippet Code. With this responsive Ad type, your ads will be able to adjust automatically to the required sizes and shapes.

Previously, you will have to set rules such as allowing images and text at the same point. This procedure is still on and you can also use in case you do not choose to use responsive code.

Using images and text to date also has a significant impact on your revenue as it improves your match on your site and also increases your fill and Ad yield which results to eCPM and consequently increase auction pressure.

Enabling both text and photo advertising to bid for your ad stock creates auction pressure, likely resulting in the price and eCPM increase.

Another thing you should have in mind is that creating line items in different sizes also can help increase your Ad yield and revenue. This is because some of those line items have different ad sizes and their prices vary as set by advertisers.

Here are the steps:

In order to prevent unwanted vendors from operating on your platform, Ad Exchange allows publishers to decide and Opt-in ad technologies if they choose to.

The fact is, many media buyers use various third-party vendors and their technology tools for buying media, remarketing and data collection which needs to be certified by Google before they are allowed into the system.

This is to tell you to trust them too since Google has given them access to your inventory. Allowing those ad technologies will increase the demand flowing through the network which will benefit publishers.

As a publisher, monetising your traffic to get the maximum income benefit should be a top priority. Using Google Ad Exchange could be one of the greatest opportunities.

Though there is a lot involved in optimising your Ad display to improve your fill rate, eCPM and ultimately revenue can be possible in the above suggestions.

It is enormous opportunities also using tools like Google DFP to optimise Ad positions and sizes from various demand sources.

Maximising your revenue should be your focus but that does that mean you will allow all kind of Ads to be published on your site or blog is it’s against your principles. We advise you to carefully review these suggestions before implementing them on your publishing sources.

Bing Ads – Complete guide on Types, Tips and Cost of advertising on Bing

How To Use Pinterest Business To Make Your Audience Powerful

What is content marketing – All you need to know

How to create an effective social media marketing strategy in 2020

RollerAds review – All you need to know